Writing when I should be sleeping

I found some pictures of myself that were taken when I was pregnant with Courtney.  I had put these pictures into the bottom of a box, no doubt thinking that it was the safest place for them.    After a while, I convinced myself that the pictures were lost for eternity.

Imagine my surprise when I found them the other day!  They were in a box under a bunch of books of paper dolls.   (I collect paper dolls).

There is one picture of me, in profile, not wearing anything but a smile and a big belly.  I will not publish that one.  The main reason I won't publish it is that I don't want to embarrass my daughter (the baby in my belly).  The other reason I won't publish the nude photograph is that somehow somewhere the picture would show up somewhere silly in an attempt to either embarrass me or just to show off in a sinister way, what a 23 year old pregnant woman looks like. The other three pictures are very tame and I will probably publish them here.

It is always fun and a bit of a surprise seeing how we looked years ago.  I look and look and I wonder where that "me" went.    I know that virtually every mother had been pregnant.  I know that *my* pregnancies were no more or less special to my families than the others were to their families.  Yet I look at my pictures and am so amazed.   I held life inside of me.  I grew it and nourished it and birthed it and then nourished again- at the breast instead of the umbilical cord.

They say that it takes a baby a little while to realize that it is a separate person from it's mother.  I am sure this is even more so when a family practices attachment parenting and long term breastfeeding as our family did.

A three month old baby will smile at it's reflection in a mirror.  At some point he realizes that the reflection is not just some random baby but himself.

When I first learned that I was pregnant, I rushed home and looked into the bathroom mirror.  I expected to see something profound and all I saw was myself.   I started into my pupils hoping to find something.  Some universal message of motherhood.   Maybe I did see it.   I know I saw my life changing.

Now, when I look in the mirror I see my parents.  It depends which way my hair is sticking up and how puffy my face is when I wake up as to which parent I start each day looking like.  It varies and changes.

I look at the pictures of my children over their lives and try to see the young man with a beard as the babe at my breast.   The toothless smiles all gummy and sweet take me back to that place of being a mother.  The place of learning your child's needs, wants, likes and dislikes.     Those early years seem so hard and exhausting.    But now, looking back, I would love to have some of those days back.  I would love to take my child up in my arms and cuddle while we read a book together.

Now I am required to stand a respectable distance away.  Give a hug when they are coming and leaving, but other wise, not the same kind of physical intimacy that being the mother of a baby or small child requires.   When the babies and kids were little, I would feel totally touched out by the end of the day.  Now I am able to sit and knit or read or watch TV and nobody climbs on me or demands my attention.  But when I get the chance to have a little one in my arms or on my lap I do love to breath it all in before it flutters away.  Babies and children are such magical, fleeting beings.

The other thing that is something of a surprise is how much you love them when they don't really need you.   There are these five adults in the world that Nick and I gave life to and shared space with and now they are independent thinking adults.   There's nobody leaning on me when I am trying to do something.  There's nobody banging on the bathroom door when I am trying to "go".   There are no little handprints in places that you cannot figure out how they got there.

And there is the surprise of looking at old pictures and realizing how beautiful you were even though you didn't think so.   Yup.  There's that too.

This is me in labor on the day Courtney was born. 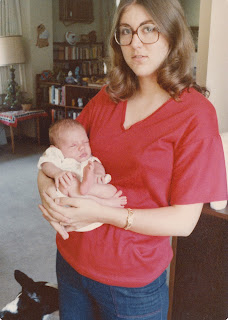 And here is my beautiful baby, Courtney and her terribly young mother, me.
Posted by Nancy at 12:52 AM