I got finished with IV antibiotics and the pill that I was taking.  Got the Picc line removed last week.  I guess that means I am free.  At least free of those constraints.  It's so nice that my day isn't revolving around taking pills and administering drugs and flushing my Picc line.

The site where the Picc line was is still tender.  I have had to wear a bandage over it because it hurts and I didn't want anything- like clothing, rubbing it.  Right now it is feeling alright.

This adventure has been very different than I expected.  I am not sure exactly what I expected, but I do know what I was afraid of.  I was afraid that I would have to be on a ventilator like the last time.  I was afraid I would wake up from surgery in a lot of pain.  I was especially scared of waking up with deficits- unable to think clearly, unable to walk or talk.   But I got through that better than expected.  I was thrilled when I wok up with no headache pain!   I felt wonderful.

Then after two weeks of feeling great, I was knocked down by being sick and going back into the hospital.

When I came home from surgery, it's almost like I was high on life.  I was feeling so positive.  So happy.  I had a hard time understanding why I had ever been sad or angry.  Those thoughts and feeling had vanished.

Getting sick after feeling so good was a shock and a surprise.  The second stay in the hospital felt more like work.  I had to work on getting better.  I had teams of doctors from several departments coming into my room and looking at me.  Asking me questions.  I did smile and talked and was sociable.  But not happily bouncing in the joy I had when I was first out of the OR.

And now, I am tired.  I am no longer tethered, but am cautious .  I have stayed housebound mostly.  Partly because I am not feeling 100 % better, but mostly because I am terrified of getting sick.  The flu is said to be especially bad this year.

I am expecting to wake up with my energy restored one of these days.

Meanwhile, here I sit.  In my pajamas, with my computer in my lap.  Watching a lot of TV.  Healing.

My hair is growing, slowly, but it's coming along.

Here are two pictures:  one from the week I had surgery, and one from today, six weeks post surgery. 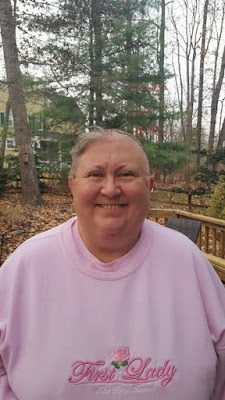 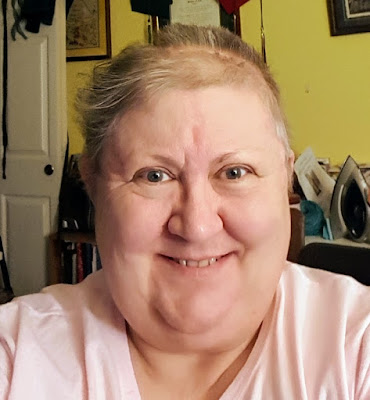 Went to Hopkins this afternoon and met with the neurosurgeon and the plastic/ reconstructive surgery doctor, both of whom did my surgery. It's been just over 5 weeks since my surgery and I was supposed to have the stitches out at two weeks.
Dr Gordon, the plastics doctor said that when I re-entered the hospital with swelling of my eye, the top of my head and the side of my head, the thinking was that it could go one of two ways. They might need to do another surgery to remove the implant that's in my head, or they could put me on IV antibiotics. Since they went tot IV course, it was decided to keep the stitches in place in the event my head swelled up more and the skin broke. The stitches would help keep it together.
Some of the fluid in my head, right over where the implant is, was making a bulge in my head. A doctor syringed off a lot of that fluid (yuck!).
It is so nice to have my stitches gone now. I have a couple of bald spots that I suspect will not grow back. I'm okay with that!
Since I still have the Picc line in my arm and am administering IV antibiotics though it, I am not planning to leave the house any more than I absolutely need to.
I see the infectious disease doctor on January 22. She is the person who determines when/ if I can get off of the IV drugs and have the Picc line removed.
I consider myself housebound until the Picc line is removed.
I am happy to be alive. I am very happy to be rid of that pesky tumor! 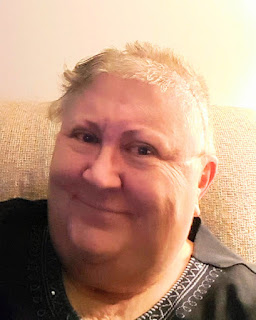 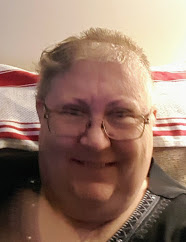 Tuesday, January 2, 2017 marks 5 weeks since I had my brain surgery.   I am still on IV antibiotics which means I have a picc line.  I see the medical team this Thursday, so maybe I can get some or all of my stitches removed and come up with a schedule for being done with the Picc line.

I will now post a picture of what my picc line looks like.  There is a tube/ catheter that is threaded into my arm and down toward my heart.  I have two "ports" on my line so blood can be drawn from one, and medication can go into the other.

I am also sharing a picture of how much hair I have got.  Still not a lot, but more than I had a month ago. 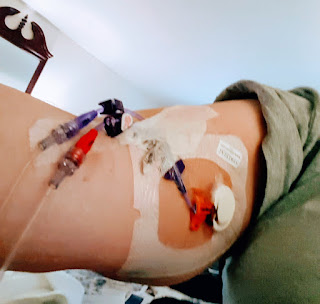 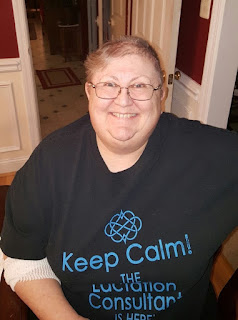 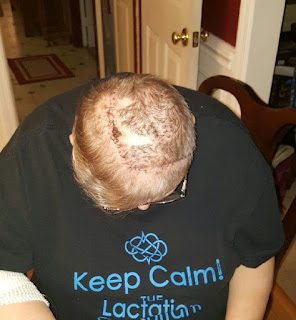 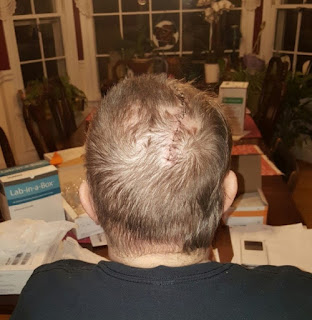