November 28, 2017 I had brain surgery, that makes today my one year craniversary!

Glad the year has passed and hopeful that I won't have any more brain tumors!

Here's my collage for the year: 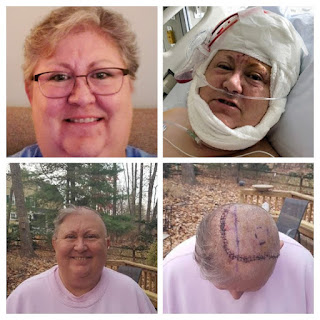 And here's the MRI image that shows the tumor: 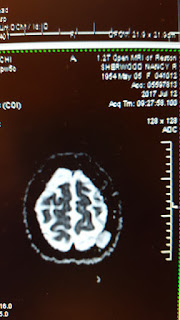 I am sure I posted all of these pictures before.  But today is a milestone day, so I am posting them again

It's "that" time of the year.  Two days after Thanksgiving and all the Christmas specials are on TV.  The radio is playing Christmas songs.  We are (sort of) planning our Christmas party.

Thanksgiving was small, but very nice.  My sister and her son and the two "cousin dogs"were together to celebrate the day.

We made gluten free stuffing for Carol and myself.   I made vegetarian stuffing for Austin, who came later in the evening.

And now I am in a soft of a funk.    Lots of reasons and no reason.   Shorter days bring about the seasonal affected disorder.   I probably need a full spectrum light to help me get out of the funk.

I am also feeling "old".  I am not sure what exactly I mean.   I am physically unable to do the things I think I should be able to do.  I have tried bringing boxes in from the garage and putting them into the basement.  I did one and that was all I could do.

I am going to Weight Watchers an am losing weight.  I know that will help.  With a lighter body I will be able to move easier and do more.  My knees won't hurt so much.

What I said today at Weight Watchers was that I want to live to be old, I just don't want to feel old.  I guess that's where I am.

This afternoon I am going to a "Day after the Day after Thanksgiving".   The host is a mom I helped with breastfeeding maybe 9 years ago.   I look forward to going.  There should be a lot of kids there!

I kind of miss kids.   As adults we spend a lot of time reminiscing about our childhood.  But when you look back, childhood is such a short period of time.  For a parent, it is like a flash of light.

All of the mess and noise and fights and crayon marks on the wall.  Parenting children is all consuming.  Then it's not.  And they grow up and move away.  They are independent.  That's what we want.  Strong, capable adults that we raised to be good people.  And they are good people.   But they don't really belong to us like they once did.

So I miss my babies and my rambunctious kids and teens and young adults.  I suspect they miss us from time to time, but mostly they have their own lives.

We were the same.  And then, our parents were gone.  All of them.  Mine and Nick's.  And now that we don't have them any more, we miss them more that we imagined we could.

For all of thee feelings, the good, bad, sad, angry, hurt, I do feel privileged to be a part of it all.

I think of Kurt Vonnegut's poem:

I did a thing!

Nothing all that exciting really.  There are four bedrooms in the upstairs of our new house.  Three of the rooms don't have any lamps.  Well, didn't.  I took lamps upstairs and figured out which outlet goes with the wall switch.  And now when you enter a bedroom you can flip the light switch and there's light!

Not a big deal I know.  But my knees are not happy today, so I have been feeling a bit crippled and disabled.  It's nice to be able to do things, no matter how small.

Let there be light!

What do I know about assumptions and what I know.  Specifically I was thinking about my now grown children.    I think of Kahlil Gibran and his poem about children.  He says that our children are not our children "and though they come through but not from you"

All of our children came through me.  Through my body.  But they were free spirits from the time they realized they were alive.  Does a fetus know it's alive?  That's a discussion for another day.

The point is, for me, that our children don't belong to us.  They are who they are. We are their guardians and their protectors.  But not their owners.

My first born has not lived under the same roof as me for almost 20 years.  I think of her as an infant, totally dependent on me.  A toddler who was both adorable and drove me crazy at the same time.

This is true of all five of them.   Yes, I am their mother.  Nick is their father.  We are all linked.   But, beyond the first time they got onto the school bus, who are they now?

They have had their own personal world that I couldn't be a part of, starting when?  Maybe the first time they got on the school bus.   Maybe nursery school?   Maybe when they weaned?  Maybe when they left our family bed and started to sleep on their own?

My children all have friends, homes, likes and dislikes.  And I don't know all of this.  I don't know what their memories of their childhoods is. And I suspect that they all have different memories from one another.

But the bond is there.  I love them unconditionally even though I don't know what their day to day is.  It doesn't include me.  And it shouldn't.

My kids grew up with grandparents.  Some they knew better than others.  My older kids knew my mother as an active, fun person who took them bike riding and to the movies, and even to the beach.

My younger kids didn't grow up with that grandmother.  They grew up with a grandma who was disabled by a stroke.  They knew a woman who was on oxygen all the time.  A grandmother mostly confined to her electric recliner, or a wheel chair.

My mother was 52 when Courtney was born.  She was 64 when Chance was born.  And in that amount of time my mother was a different person.   My kids all loved her.  But what did they really know?

I didn't even know my mother.  Not completely.   I heard her stories of living on the farm and some of her antics.  When visiting her younger brother a few years ago, I learned that in high school, my mom had the nick name of "torchy" because she was so hot!    There's so much I don't know.

My father was an elusive, troubled person.  He would never, ever talk about his childhood or his father.   I don't know why.  I have my suspicions that my dad was treated cruelly by his own dad.

My kids knew their Sherwood grandparents better than they knew my parents.  They were both 60 when Courtney, my first, was born.   They were very gentle with the kids.  By that I mean, they would read to them and talk to them and learn what the kids had to say.

We keep learning new things about them too.   A few years ago we learned that my mother in law had interviewed Amelia Earhart when still in high school!

I think that at least some of this is stirred up by Veteran's Day. So so many  men, mostly.  And those who are still living look so absolutely different than they did.  How can an old man be a 18 year old soldier?   How can my first baby be 40?

Bed time for this tired mom.

Driving on a country road near my home today I was taken in by the beauty of the colors on the trees.      My photos cannot do justice to the brilliant colors.'

I think that the colors of nature, especially fall colors are as close to religious as I can be.  Breathtaking 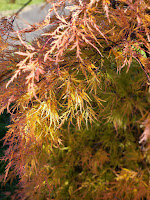 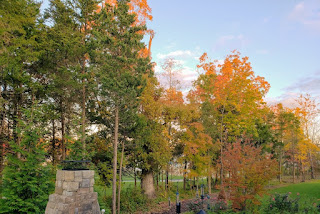 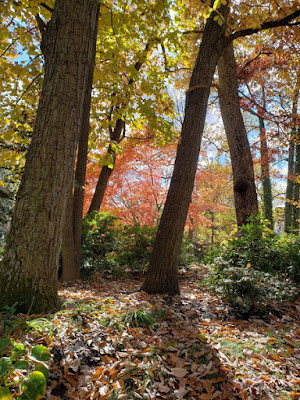