Amoeba the cat died today.   He was Courtney's cat that she brought home from college one summer.  When she went back to school she asked if Amoeba could stay here and I said yes.

And so it began.  The pet parade into the Sherwood house.  As one might guess, having five children by choice, I am not a fan of "only-es". Once we had Amoeba, I felt that he needed "siblings".    So, Courtney and I went a a rescue event and picked out a kitten and brought her home.  The kids named her Beta.  She is still here, plodding along.  She loves me, and the rest of the family.

Tigger and Pooh came later, and then Black cat, who had health issues and died at a young age.  All five of them are in the picture below.

Amoeba lived here for a few years.  When Morgan and Robin moved to Portland they took him with them.  And there he has lived ever since.  And today, that's where he died.

I jokingly refer to Amoeba as my "first grandchild".  Well, at least my first grand cat.  Now I have a lot of them. 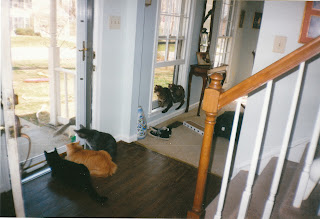 Five Sherwood cats looking at a squirrel.  Amoeba is the third one from the left.

So Meebs as you were affectionately called, or Amoeba Pete.  Good bye.  Sweet dreams.   Thank you for being in our lives.  We love you wherever you are.