The drive from Amarillo, Texas to Oklahoma City, OK was supposed to take about 4 hours.  But there was an accident ahead of us on the highway that delayed us by 2 hours.  We could see a small plane in the distance, swooping and dipping and then we lost sight of it.  At first we thought that the plane had crashed.  But it came back.  It was surveying the crash scene as near as we could tell.
Once we got moving it was clear what had happened.  About a mile or so ahead we drove over a bridge that had evidence of a fire.  On the side of the road, in the median strip was a completely burned out truck.  I hope nobody got hurt!

I brought about 6 balls of yarn with me with the thought that I would be sitting around knitting in the evenings.  So far I have frogged (pulled out) about as much as I have actually knitted.  Of course if I had not brought the knitting along I would be wishing that I had brought it.   We went to a yarn store today that really inspired me.   But I still haven’t done much knitting!

We had planned to eat mostly at mom & pop type diners across the country.  Trouble is, we haven’t been able to find many.  In the small towns many of the old businesses are boarded up.  All of the fast food chains from home are everywhere now.  Nick commented that we could be just about anywhere when it comes to eating- it’s all about the same.

Now, not to contradict myself (oh why not), in Amarillo we ate at a local restaurant and I had a chimichanga that was made with a corn tortilla.  Wow was that ever great! 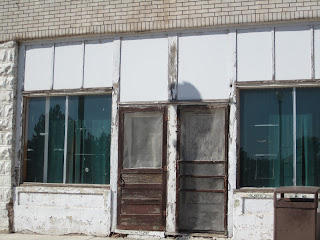 When we got here yesterday, after driving more than 6 hours in over 100 degree weather, we were too wiped out to do much but walk to the IHOP next door to our hotel.

Email ThisBlogThis!Share to TwitterShare to FacebookShare to Pinterest
Labels: This is what we have seen a lot of across the US this summer