There were only four Sherwoods at our house for Christmas.  In fact, we didn't even do Christmas on the day- we celebrated on December 26th.

Courtney and Morgan and Darcy plus Courtney's boyfriend, Zach and Darcy's partner Jody all met at Courtney's Portland house.  They sent pictures.

Other out of town festivities took place with the West Coast Sherwoods.

Here in Virginia, I went to my sister's house for Christmas Eve with her blended family that  am blended with in one way or another as well. 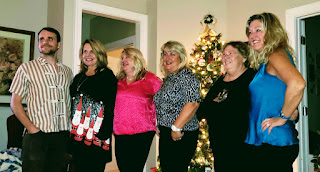 Chance drove up from Richmond.  Austin was already here recovering from his Africa trip.

Nick did all of the work of stuffing stockings.  I did most of the buying (ordering online) and we both wrapped presents.  Somehow I ,managed to get myself left out of the pictures.

I must be crazy! I think it's worth it

I have scheduled my knee replacement surgery for the other knee.  My right knee.  March 17th is the date.

I swore I would never, ever do this again.  Reading back over my blog posts from August on for the first few months, it was really hard and painful.  Now, my left knee is not 100% "normal", but at 65, I am not sure what normal looks like.   It is so much better than before the surgery.

So, watch this space!
Posted by Nancy at 8:42 AM No comments:

I have never made this recipe before and have never used this flour.  But I am really in the mood for cookie gun cookies.   If I remember I'll post on how it all turned out!

Instructions
Adjust oven rack to middle position and preheat oven to 375 degrees F. Line 2 rimmed baking sheets with parchment paper.
Beat together butter, sugar, and vanilla on medium-high speed until light and fluffy, about two minutes. Stop the mixer once or twice to scrape down the sides of the bowl. Add the egg. Mix until combined. Stop the mixer and scrape down the bowl. Mix for 15 seconds. Turn mixer off and add the flour and salt. Tun the mixer to medium-low. Mix until a dough forms.
Fill a cookie press according to the manufacturer’s directions. Press cookies onto prepared baking sheet. Sprinkle with sugar, if desired.
Bake until cookies are edges are golden brown, about ten minutes. Allow cookies to cool on the baking sheet for about three minutes. Transfer cookies to a wire rack to cool completely.

Repeat with remaining dough. (If the dough won't release from the press during the second batch of cookies, stir in a little water, about 1-3 teaspoons. Sometimes the dough stiffens between batches. Adding water solves the problem.) Allow baking sheet to cool between batches or the cookies will spread.

Store in an airtight container for up to one week.
Recipe Notes
* Bob's Red Mill 1:1 Flour was used to test this recipe. If you don't have this flour, replace it with a gluten-free all-purpose flour blend that contains xanthan gum OR with 1 1/4 cups white rice flour, 1/2 cup sweet rice flour, 1/4 cup potato starch, 1/2 teaspoon xanthan gum. Whisk ingredients together and then use as directed in the recipe. 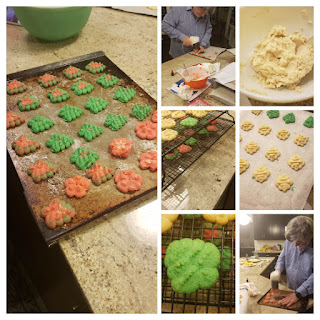 Comment:
Do NOT use parchment paper.  The dough will not adhere to the paper.  An ungreased cookie sheet worked fine for us!

I'm not sure if I am melancholy or just tired.  We had our second Christmas even in a week.  Last Saturday my friend Shannon and I hosted a cookie party at my house.    Yesterday we hosted a Christmas party, pot luck, gift exchange here.

I cooked a beautiful turkey.  We had gravy that I had frozen from Thanksgiving, Nick cooked a ham.  We had everything you can imagine and nobody went hungry. I didn't take many pictures, but I am hoping that some of the others in the group will share there pictures with me! 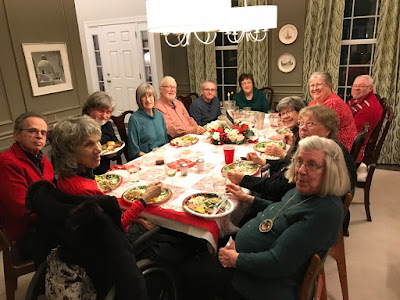 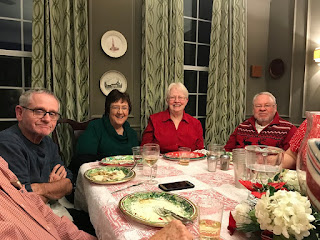 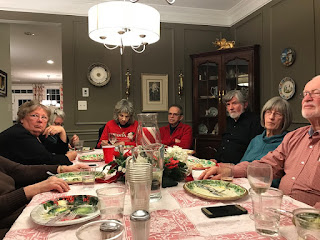 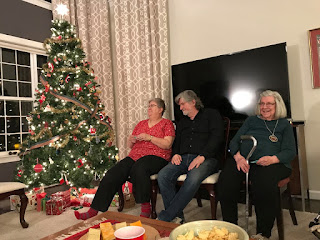 This morning I was remembering Christmases past.  Particularly I am thinking about the kids' first Christmases.

Our first two years overseas, I was pregnant both years at Christmastime.   I lost the first baby shortly after New Years.  The second year I was nice and round with Courtney in my belly.

For her first Christmas, Courtney was 10 months old.  We were living in College Park, Maryland.   I don't remember much about what we did in our house.  My memories are mostly of us visiting grandparents.   We went to Nick's parents, Courtney was dressed in a cute red (probably velvet) dress, white tights with ruffles on her bottom and her Stride Rite shoes.   As a fairly new walker, she wanted her shoes off.  The Sherwood grandparents had hardwood floors.  Courtney kept slipping and sliding in her tights, so we took them off and she scampered around in her pudgy bare feet.

For Morgan's first Christmas we were living in Chiang Mai, Thailand.  He was almost 10 months old.  I am not sure if he was walking yet, but I do remember the cute green pajamas he was wearing.  Both kids were old enough to enjoy tearing presents open!

Darcy's first Christmas was in Tromso, Norway.  He was only 3 months old, so  I suspect he nursed and slept through much of it.

Austin was seven and a half months old for his first Christmas.  We were living in Reston, Virginia then. Austin was certainly able to appreciate tearing and trying to eat wrapping paper.  I don't think he quite understood that there were neat things wrapped up in the paper.

Chance was not quite 3 weeks old for his first Christmas. He was born in Hong Kong and we were staying in a hotel in Hong Kong.  We choose the hotel for the proximity to the Toys R Us store!   Since we were in a hotel, we didn't have a Christmas tree.  We put tinsel on the wall in the shape of a tree.  Somehow Santa was able to find us in our hotel room!

Christmas 1990 was our first Christmas as a family of seven.  Five kids and Nick and me.

Christmas 2017 is the last time we were all together for Christmas.  Plus Darcy and Morgan's partners.

That year (2017) I was recovering from brain surgery.   An infection that I got a few weeks after the surgery put me back into the hospital.   We were not even sure if I would be home in time for Christmas, but I was really more concerned about getting the infection cleared up than getting home.  Everyone could have come to the hospital is they had to.

This is our second Christmas in our "new" house in Aldie, Va.   I'm not sure who will be here, if anyone.  Austin is heading back to Maine.  Chance is pet sitting for a friend on Christmas day.    It's okay.  One thing we have learned having a big family, and also living the Foreign Service life, is to be flexible.

Gifts have been sent to the homes of our out of town kids and partners.  Gifts are here under the tree for the local kids if and when they can come.

We have seen our family grow.  And then get smaller with the losses of loved ones.  It seems that life is constantly moving and changing.

That means we could have anywhere between seven and 30 people here for coffee and cookies!

Fortunately, I am pretty used to entertaining, and am generally pretty chill about it.

It's 10:00 am and I am still in my pajamas.   Just finished baking cookies.   I guess I need to take a shower and to get dressed sometime before the party!

The dough in the picture and the cookies in the other picture are two different types of cookie. 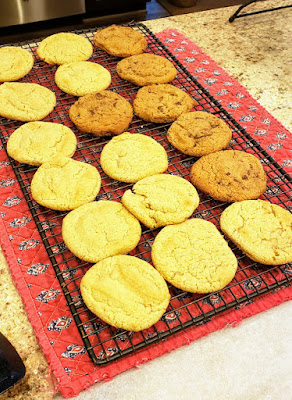 It's getting closer and closer to Christmas

Such a strange time of year. No, not winter. I like winter!   Christmastime.  Good feelings and sad moments.

We've been decorating the house.  Putting up and decorating trees.  Nick does most of the work.   I helped him and he said it's the first time he's had help in ages.  Of course, when the kids were little and they "helped" it was cute, but so hard to get it done.

Tomorrow a friend and I are co-hosting a cookie party.  She told me that she's never been to a cookie party so I offered our house if she did the organizing.    An awful lot of people are not coming, so I hope my friend is not disappointed.  I'm sure it will be fine.   I have to bake cookies in the morning.   I planned to bake today, but guess what?  I didn't do it.

A week from tomorrow we are having our annual dinner/ Yankee gift exchange.  We've hosted this dinner for at least ten years.   One year we were snowed out, and two years ago I was in the hospital with complications from brain surgery.

This year I bought just about everything online.   I bought a postal scale so I can just weight and print postage avoiding long lines at the post office.  Cards got mailed today too.

Sad news: My sister's sweet dog, Daisy, died last week.   I was with my sister when we said goodbye to Daisy.

Loving can be so painful.  Losing is part of life, but it sucks 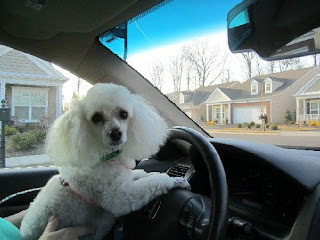 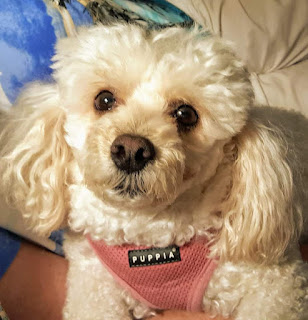 Is it Christmas Time already?

Today is December 2nd and all sort of folks are posting pictures of their decorated Christmas trees on Facebook!

Thanksgiving was late this year, so I guess the shorter time between the two holidays prompted the rapid transition from Thanksgiving to Christmas. Makes my head spin!  We still have left over turkey and stuffing in the fridge,   We haven't put our autumn decorations away yet.

December 14th I am co-hosting a cookie part at our house.  So the Christmas decorations need to be up before then.    And Nick and I are hosting our annual  "church" group Christmas party on the 21st (late this year- maybe because of Thanksgiving?)

I am not sure if any of our kids will be here this year for Christmas.  Courtney and Zach will be at home in Portland.   Morgan and Kim will be in Seattle.  Darcy and Jody will be at their home in Hillsboro, Oregon with Jody's kids.  Austin plans to be in Maine.  Not sure what Chance's plans are.

Kind of weird.  You have this flock of kids who fill up the house with noise and mess and fighting.  They drive your crazy, but it's okay mostly.  Then, poof!  They're gone.  They have their own lives.

The last time we had all five kids (and Kim and Jody) together with us for Christmas was two years ago.   I was recovering from brain surgery.  I was bald and had a pic line for the IV antibiotics I was administering every day.  And we were in Reston.

Courtney, Austin and Chance are the only ones who have seen our new house.  We've been in it for a year and a half.   I wonder if Morgan and Darcy will ever see it?  I wonder if there will be a time that all five of them are together with us again?  All of the grandparents are gone, so no more funerals to bring them home.  I hope!

This week we plan to go to Richmond to see  Chance and celebrate his birthday.  He'll be 29!!!

I have much to be thankful for even though Thanksgiving is over!