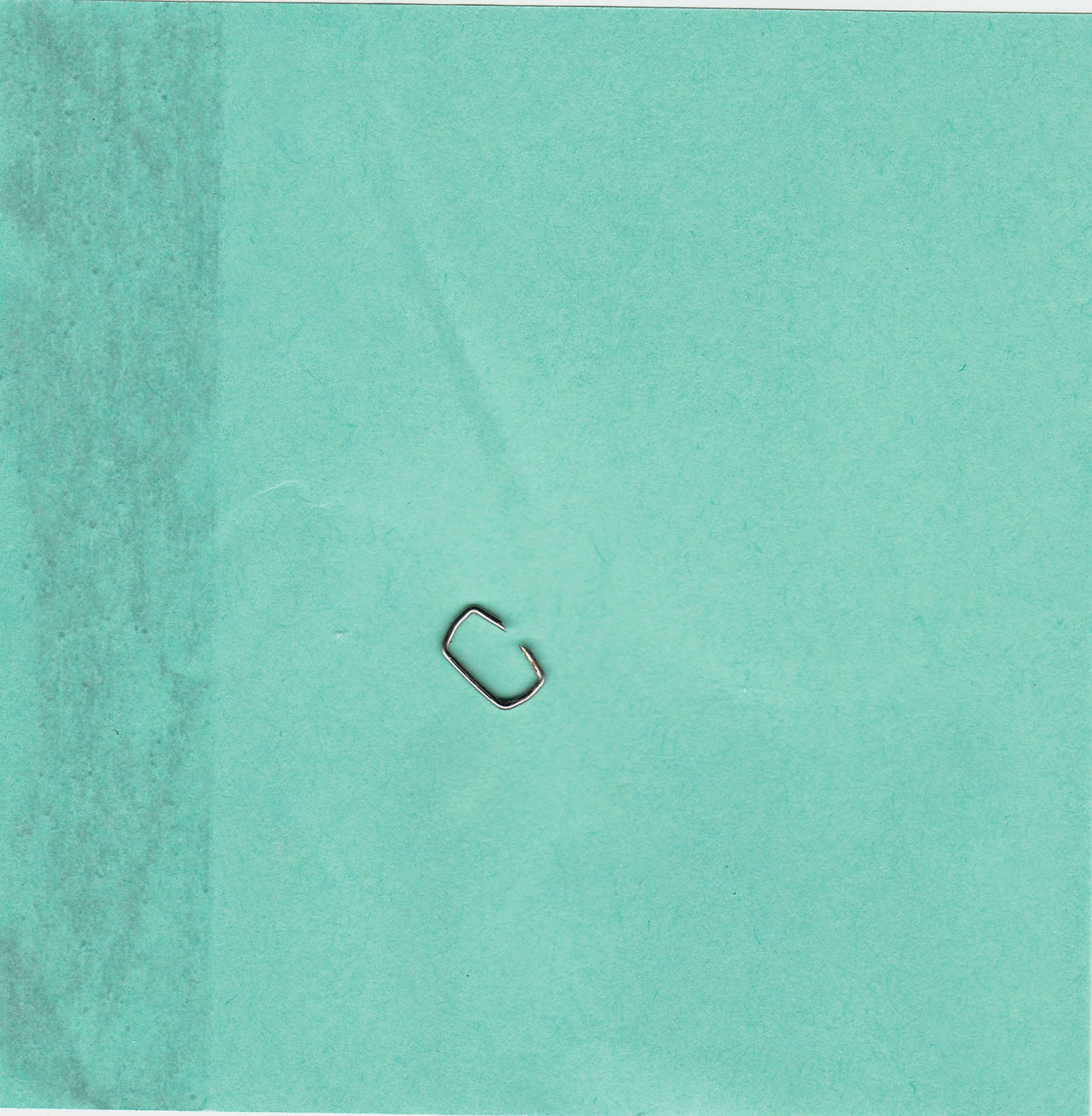 This is one of the staples that was used to hold my scalp together after my brain surgery.  I think there were 40 of them all together.   They didn't really hurt as much as just feel annoying.  When I was little, I used to wear a ponytail.   My mom made my ponytail so tight, that when I took the rubber band out at the end of the day, my hair hurt.  That's sort of the sensation the staples gave me.    Getting them removed was a real relief.    That was about 4 weeks ago.

I am now more than six weeks out from my surgery.  Monday July 28, 2014 marked six weeks.     It's strange, I have had abdominal surgery that takes some time to recover from, but it is so different.   You know right away that your belly needs to heal because standing up straight and rolling over in bed are so hard to do.   You guard your belly.  Coughing makes you hold your belly tight.  The main pain I think I had from this surgery was the pain from my throat having been intubated.  My headaches from the tumor seem to have gone away with the tumor.

The difference is this.  My brain has been messed with.  I am sure I was driving and doing pretty much everything 6 weeks after each of my kids were born.  I am not ready to drive at this point after brain surgery.   I feel at times like I am running through something thick that slows me down and sucks away all of my energy.   I get depressed because I feel so immobile.

When I get out and do things with friends, I feel energized (that's the extrovert in me), but then I get really wiped out really quickly.

It's sort of a tug-of-war.   I want to get out and about.  I want to rest and sleep.   My compromise is, most of the time, to knit and watch TV.

I am so vulnerable to bug bites, that going out in the yard, even for a few minutes, leaves me all bitten up and itchy!  With my luck I will probably get West Nile disease or malaria.

I think about my kids a lot.  A whole lot.   Like every day, many times a day.  They were my full time job for so many years and I miss them.  I am glad they are all grown up now and don't need me like little ones do because I would not be able to do much mothering.

I know that I yelled and got angry and fed up and frustrated when the kids were younger.  It's so hard being a parent.  Especially when you are the primary parent- SAHM (stay at home mom).    But there was the spontaneity.    We could make cookies, or play dough.  We could cut up apples and eat them with ranch dressing or peanut butter.   Sometimes, even when I didn't really want help, the kids would try to help by sweeping the floor or doing the dishes.  With tiny kids this involves a lot of physical action, and a much bigger mess than you started with.  With older kids you often end up hurting their feelings by trying to tell them how to do a task that they already "know" how to do.  Usually you end up with a job well done, even if it is not the way you would have done it.   For me, the hardest part was allowing the kids to find their own way to do things.   I don't think any of them paid attention to how laundry is "supposed" to be folded (according to Mom- me).    Since they all started doing their own laundry when they were 13, it really was not my problem or my business any more!

A few years ago we painted Courtney's room and put in new curtains and bed linens.  It is still Courtney's room when she is here.  But it is also the guest room, when company comes and Courtney is not here.  She lives in Oregon, so she is not here a whole lot.

The boys' rooms are something of an archeological find.   Ruins.  Chance's room from when he was little, and older brothers had not moved out yet. His teddy bear and big yellow school bus wallpaper is still there.  But not a whole lot else.   Darcy's room still has the big wall poster of a baseball stadium.  The furniture consists of a futon with a red cover, an old office chair and some sort of desk.   Morgan's old room has been taken over by Chance.  The wall poster of the Challenger Space Shuttle, from Morgan's days, is still there.  A desk and a mattress on the floor and at the moment a Kittie litter box are all that are there.  Chance is in Richmond in his apartment only coming home every month or so.

Austin is still in residence, and his room looks like it is being lived in.   There is furniture in use.  Bed, dresser, desk, computer.  Wall poster of a golf course.

The carpets in all of the boys' rooms looks terrible and cannot really even be touched by the carpet cleaner.  Not sure what all has been spilled there, but the only way to get rid of it is to toss out the carpets.

When we moved in here in 1983, Courtney was 5 and Morgan was 2.  We were a family of four.    The house was a four bedroom house and seemed very large.  Especially since both kids were still sleeping with us!

By the time we had Chance, we were a family of seven. The kids were getting to the point where they wanted their own space.  They liked to pick at each other "Mom, he's sitting too close".  "Mom, he looked at me funny".   "Mom, when are you going to cut Courtney's finger nails?"   Since we were able to, it was nice to give them each their own room.  We had four more bedrooms added making it a seven bedroom house!  Now, those rooms, as I said, for the most part are artifacts of what has been before and will never come back.

I wrote more than I had planned or expected to.   And not what I expected to.  I was going to write about love.  Unconditional love.    Next time.

Here's a sweet picture of Tigger, our 15 year old cat, inside of a shopping bag: 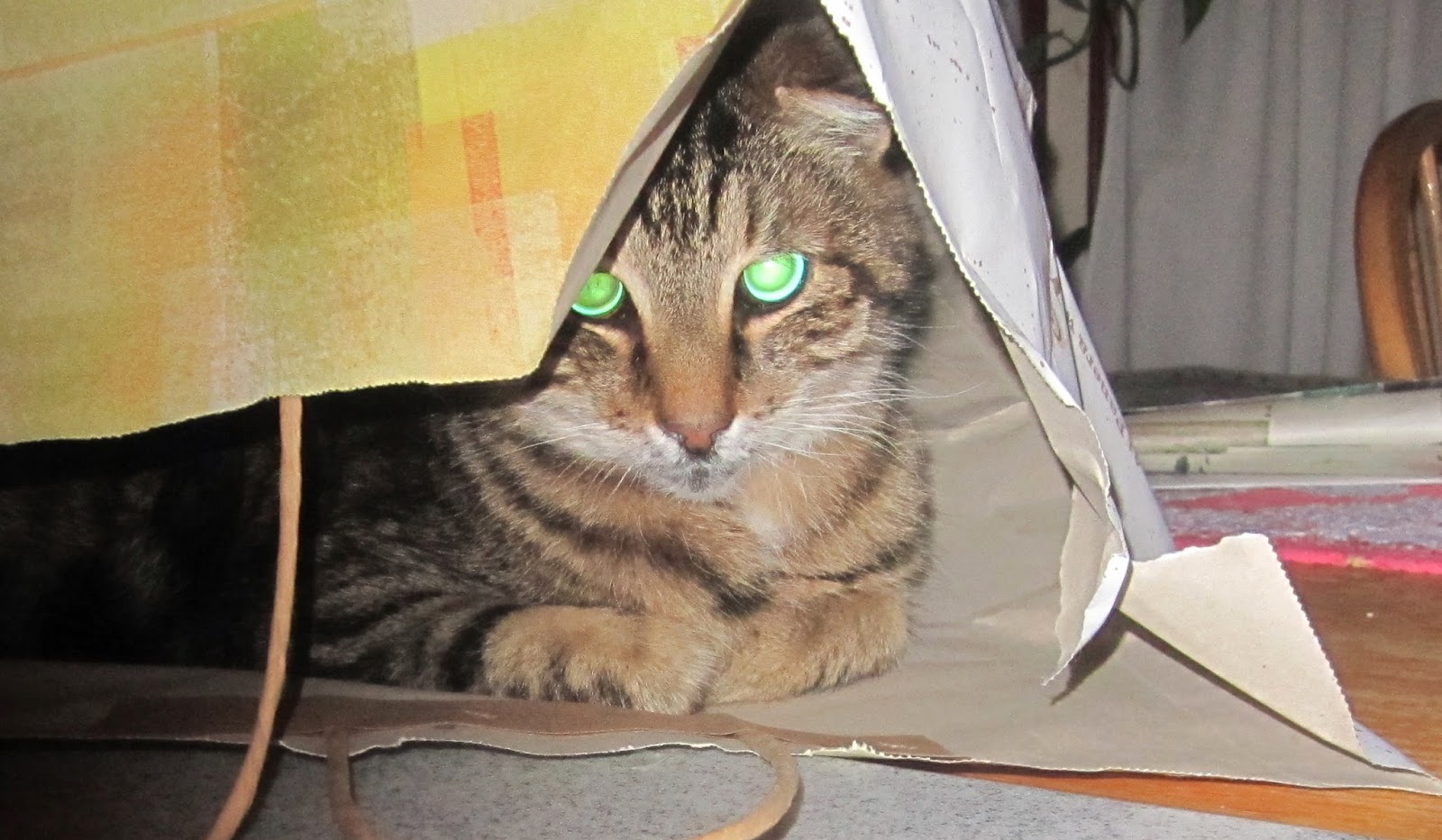