We went to the Des Moines State Fair today.  Wow was it huge.  Loads of walking and we are both wiped out!

We are in a KOA campground near Des Moines, Iowa.  This is the third KOA and so far the cabins are all pretty identical.    They are very nice.  Comfortable beds.  Air conditioning or heat as needed.  So far we have used the A/C twice.  Last night we had the window open and tonight we may even need to put on the heat. 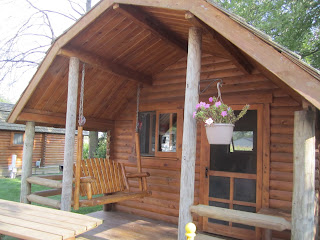 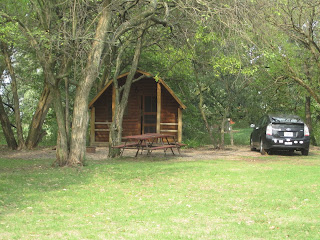 Yesterday we visited Nick's grandparents' graves in Toledo, Iowa.   It's been a while since we have been there, but they haven't moved or changed.   We went to the museum in Tama, Iowa and could have spend hours there.  Such history for such a seemingly small part of the world.   I guess it all shows that everyone is connected somehow.

One of the things that has me pondering is how many parents had to bury their children in the 1800s and early 1900s.  I know that it still happens, but not with the alarming frequency.  One family has seven children buried near the parent's graves.  All of the children died very young.  Some just infants, I think that the oldest was 7.  And who knows if they had some who lived on to adulthood and raised their own families.

The WiFi only works well when I am outside, and I am afraid that it is about to rain.  So I will wrap it up for now.