Standing on the Corner in Winslow, Arizona...

We left Lake Havasu City this morning headed for the Barringer Crater near Winslow, Arizona.   This is a carter that slammed into earth around 50,000 years ago.    On the way there I could feel the rise in altitude.  My breathing became strained.    When we got to the site of the crater we learned that it is on privately owned land and there is an admission fee.   The fee was $16.00 each and we were able to tell through the fence that there would be a lot of climbing to get to the rim of the crater to see in.  I just couldn’t do it at a high elevation, and we decided to forget it.  Also, there was some distant thunder, and we didn’t want to find ourselves acting as lightning rods!

We drove on to Winslow, Arizona (of Takin’ it Easy by the Eagles fame).  We found the corner referred to in the song.  There is a statue of the guy “standing” on the corner.  As we were about to get into the car to leave, a group on Harleys showed up.  I stayed and talked to them.  They were a group from Sweden on a tour of Route 66 from Chicago to LA.   (yes I spoke to them in Norwegian and they spoke back in Swedish).   I got some pictures of them too.  Harleys always pull at my heart and make me feel closer to Dale.

Now we are in Holbrook, Arizona.  Went for dinner and I wanted to drive around and look at the “town” such as it is.  It is a small town with one main street with shops and restaurants and a lot of boarded up businesses.

After dinner we went to a huge place that sells petrified wood.   This place is amazing.  The owner has mineral rights to a piece of land where he gets all of his materials that he sells.  There is also a museum in the store.

As we were leaving to head back to our hotel for the night we saw a beautiful, Arizona sunset and the rising of the Blue Moon. 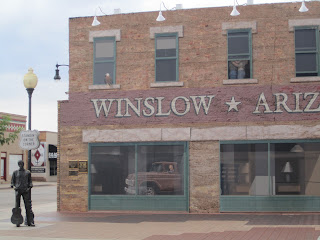 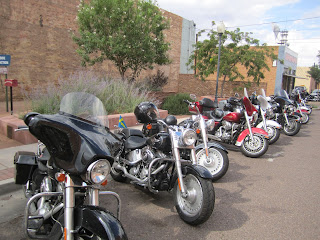 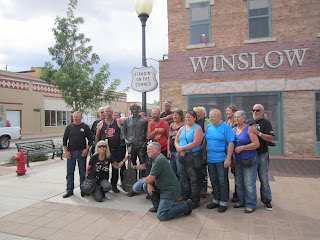 Tomorrow we hope to see the Painted Desert.
Posted by Nancy at 8:21 PM