When we lived in Kabul, Afghanistan, this was our doorbell.   There was a hole in the door frame of the front gate at our house that had a piece of rope going through it.  There was a stick tied to the rope that served as a pull.   The rope ran through the hole in the gate all the way to the front porch of our house.  This bell had the rope looped through the hole.  When the pull was pulled from outside, the bell would ring and alarm us that someone was at the door/ gate/.  It made a big "clang"!

It is strange to think that this bell, which is not that big, played a big part in our day to day life for two years.   Now my sister has it.  She is holding it in her hand in this picture, for scale. 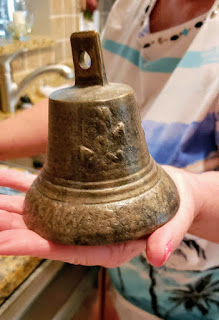 The picture below was taken on the front porch of the house we lived in in Kabul.   My mom had these Afghan outfits made for the three of us, my sister Carol, my brother Dale and me.   I was probably 6 or 7 in this picture.  Somewhere I have a picture of Dale in his Afghan clothes.  I don't know if I have ever seen Carol in hers. 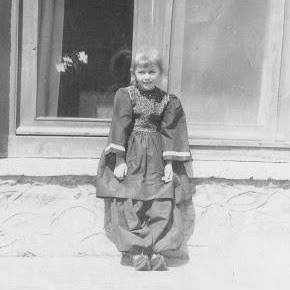 When we returned to States and moved to Wheaton, Maryland, I was in second grade.  My fellow classmates did not believe me when I said that I had lived in Afghanistan.  They didn't believe that there was any such place in the world.   How confusing to be a little kid whose friends don't believe you.  I am sure that now many people in America have heard of Afghanistan, including second graders.

There were such high mountains all around Kabul- the Himalayas.  I saw these mountains every day.  They were a part of me for a while and all of my drawings had big, snow covered mountains in them.   I doubt if any of those pictures still exist.

These are the shoes I was wearing in the picture above.  They are in my house right now. 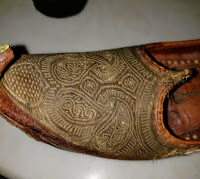 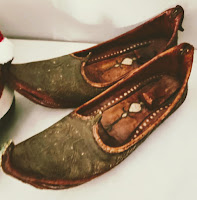