We have snow.  Everything is closed.  At least as far as schools and government and stuff like that.  Stores most likely are open but I have not really been out so I don't know.

I love the snow.  It is so beautiful when it is fresh and white and untouched.  After a very short while it will be mucky and dirty and will melt.  But right this minute is is pristine and sparkly.    The snow we got yesterday and into the night, was very light and fluffy.  When I went outside, it looked like it truly had sparkles in it the way it glistened.

I was reminded of the first Christmas after my brother, Dale, died.  We were heading to my mother's apartment in Silver Spring.   The cemetery, Gate of Heaven, is on the way.   I wanted to stop and visit Dale's grave.   As the kids and I stood there, at Dale's grave, it started to snow.  Just a flurry.  It was not in the forecast.   As far as I know, it didn't snow anywhere else.  It did not stick to the ground.  It was just that one flurry, right there, right then.

I think I have probably taken more pictures of snow than just about anything else.   It is just so amazing and photogenic.   I never get bored, but do become self conscious sometimes.

I do not honestly know what my earliest memories of snow are.  I recall sledding on a hill behind our house when we lived in Alexandria and I was three years old.   I remember the snow in the yard in Afghanistan, and I remember my mom and brother and I going skiing there.   An Afghan man carried my on his back to the place we went to ski.   There was no lift, just a rope being pulled by a motor at the top of the skiing hill.   My mom and Dale loved it and were very good at it.   I probably fell a lot.  I don't remember.  I do remember that I had real skis with real bindings and ski boots from Germany, that had fur lining.  They were red.

I tried skiing again in high school, but ended up hurting my knee.

When we moved to Norway, I looked forward to learning to cross country ski.  I was disappointed that it was difficult to ski in the winter, at least in Tromsø.  It was dark 'round the clock in the winter.  There was a lighted down hill run, but I was not in the least interested, and the kids were too young for that.

When the sun came back, we bought a pulk for Darcy, who was under a year old, and skis for the rest of us, and away we went.  A pulk is a type of toboggan that the baby is put into and the parents pull it.  Click the link under where I wrote pulk the first time for more information.

Here I am skiing on top of what we later learned was a frozen lake! 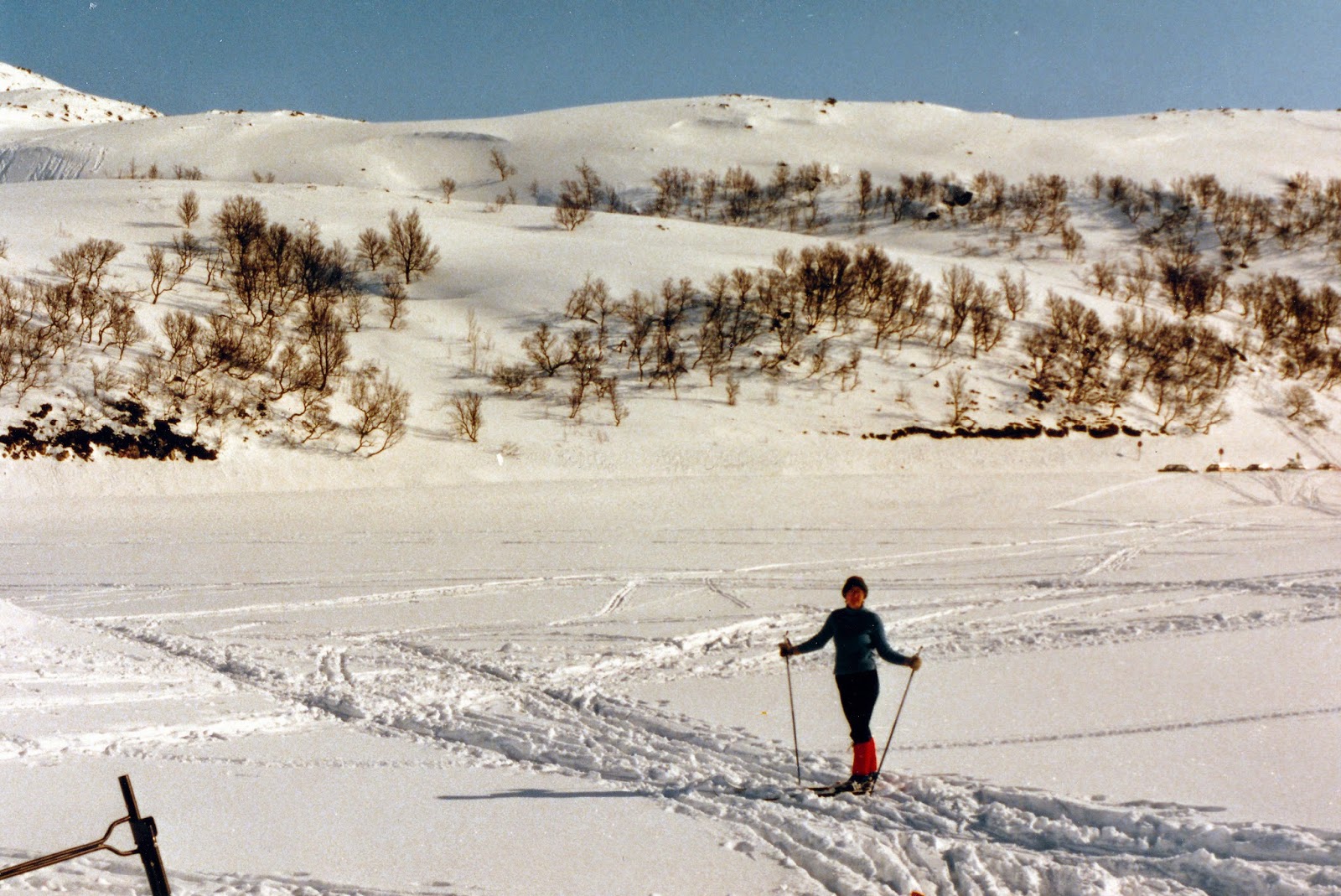 I was a few months out from having my third baby and I thought I was fat.  Oh silly me.

Anyway, it was beautiful and we really did love the skiing.   I have more pictures that I hope to load on the computer one day.  Right now my computer is being really slow and I think I should take a break for a while.