I was issued a commendation by The Commonwealth of Virginia General Assembly in recognition of the work I have done helping mothers and babies as a La Leche League Leader. The award was presented to me today by State Senator Boysko at a breastfeeding support meeting that I have hosted for around 10 years. 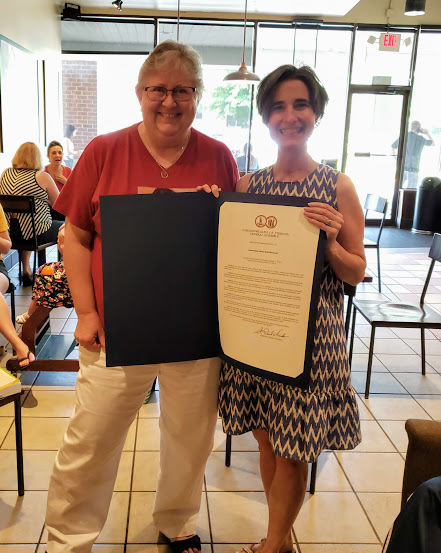 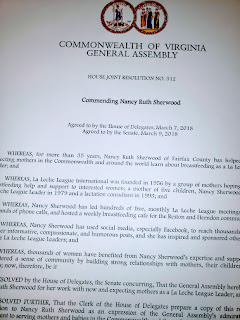 This is what it says

18107934D
HOUSE JOINT RESOLUTION NO. 512
Offered March 5, 2018
Commending Nancy Ruth Sherwood.
----------
Patrons-- Boysko, Adams, D.M., Hope, Hurst, Krizek, Plum, Simon, Turpin and Ware; Senators: Ebbin, Marsden and Spruill
----------
WHEREAS, for more than 35 years, Nancy Ruth Sherwood of Fairfax County has helped new and expecting mothers in the Commonwealth and around the world learn about breastfeeding as a La Leche League Leader; and
WHEREAS, La Leche League International was founded in 1956 by a group of mothers hoping to provide breastfeeding help and support to interested women; a mother of five children, Nancy Sherwood became a La Leche League Leader in 1979 and a lactation consultant in 1993; and
WHEREAS, Nancy Sherwood has led hundreds of free, monthly La Leche League meetings, answered thousands of phone calls, and hosted a weekly breastfeeding cafe for the Reston and Herndon communities; and
WHEREAS, Nancy Sherwood has used social media, especially Facebook, to reach thousands of families with her informative, compassionate, and humorous posts, and she has inspired and sponsored other women to become La Leche League Leaders; and
WHEREAS, thousands of women have benefited from Nancy Sherwood’s expertise and support, and she has fostered a sense of community by building strong relationships with mothers, their children, and their partners; now, therefore, be it
RESOLVED by the House of Delegates, the Senate concurring, That the General Assembly hereby commend Nancy Ruth Sherwood for her work with new and expecting mothers as a La Leche League Leader; and, be it
RESOLVED FURTHER, That the Clerk of the House of Delegates prepare a copy of this resolution for presentation to Nancy Ruth Sherwood as an expression of the General Assembly’s admiration for her commitment to serving mothers and babies in the Commonwealth and throughout the world.