Halloween and random other stuff

Nick and I went to our monthly extended family group dinner.  Costumes were optional.  Well, for Nick and I, that means we have to wear a costume.  After so many years of sewing costumes, I was out of the mood for being that creative.

I bought a couple of little kid hats at the grocery store.  I thought they looked a bit like a fox, and thought we could be "What does the fox say" that catchy ear wig song.   But we decided that nobody in the group would know what that was.  Austin came up with the idea "Fox News".  We brain stormed and came up with a cute costume idea. I have yet to figure out the editing stuff on this blog.  I don't seem to be able to write anything after/ below the picture.  Oh well, never mind.
And here it is: 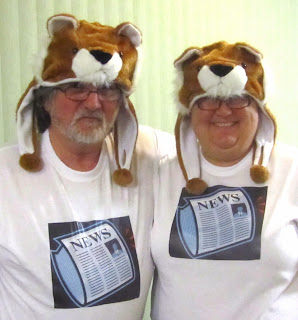