I looked up the definition of "bees knees".  There are a variety of definitions, most say it means something is swell, excellent, above average.  There is also a cocktail of the same name.  Who knew?

Well, I have knees.   Two knees.   (makes me think of Sesame Street "I've got two knees, one two...".  My knees are not swell or great or above average.  They hurt.   A lot.    Not when I am sitting.  Not when I am asleep.  But, whenever I stand up I don't know what's going to happen.    Much of the time I just kind of shuffle.  I rarely use a cane in the house.  I always try to remember to take it with me when I go out.

There have been so many skinned knees in my childhood.  And as an adult too.

I got my first bike for my 10th birthday.  It was purple.  I was probably the only kid my age in the neighborhood that didn't know how to ride a two wheeler.  I fell.  Scraped up my knee.    That day (maybe that week, it's been a while) I was in a ballet recital.  A part of the recital involved kneeling.  Of course, I was supposed to kneel on the knee that was hurt, but I had to switch sides.

Another time I have no idea how I hurt myself, but there was gravel and junk under my skin that got infected.  On my knee of course.   I had to get a shot of penicillin, and had a big bandage wrapped around my leg at knee level.

Then there was my first ski trip (well the first after the age of 7 in Afghanistan).  We were on a high school field trip to what is now known as Ski Liberty.   We took a quick lesson and then we were instructed to hold onto the rope tow.  One of the girls from my school got a ways up the hill and somehow managed to "ski" down the hill backward, screaming.  She was stopped when she backed into a fir tree.   There was a person ahead of me on the rope tow.  That person was holding their ski poles in a way that looked like I was going to be impaled.   I let go of the rope and fell to the side.  Guess what?  I twisted my knee and went to the ER.  Nothing was broken, but, a large Ace bandage was applied.  I was 16 or 17, I can't remember.

Some time passed.  I was married and had three kids.  We were in Oslo (we were living in Tromso at the time).   I fell crossing the street in Oslo over 30 years ago.  I had then baby, Darcy, in a back pack and was holding hands with Courtney and Morgan.  We were stepping across tram tracks and my shoe slipped on the track and I fell.  Hard.  On my knee.   It turned purple.  I never had it checked out, but I always thought that I must have cracked my knee cap.

Twelve or thirteen years later, we were living in Perth, Western Australia.  It was getting near to the end of our tour there.  One place that I really wanted to see was  Rottnest Island.  You have to take a ferry to get there, and cars are not allowed.  We rented bikes and rode around.  Chance was just learning to ride a bike, so we couldn't go to far to fast (we may have brought his bike).     As we were riding along, going down a hill, the water bottle that I had slung over my shoulder on a strap, slipped forward.  It got caught in the spokes of my front wheel and I went over the handlebars.   Nick was riding his bike behind me.  He says it was a terrible sight to see.  I lay sprawled out in the road.  My nose was bleeding.  My arms were scraped up.  I lost most of the skin on my left elbow.  Broke a few bones in my right hand.  And, you guessed it.  I smashed my knee.    Even so, I went on a camping trip with a group of mums from the kids' school a week later and even abseiled (repelled) down a cliff- bandages and all. 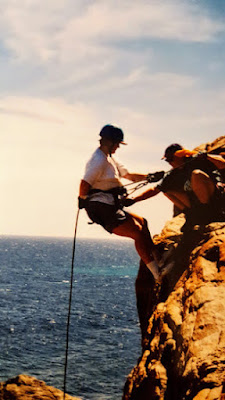 In May 2015, I was with some friends and their kids.  We were all going to our cars to head to someplace to eat.  I miscalculated the height of the curb and, bang.  Again.

A year or so later, working out at the gym, I was having a great time in spin class.  But, after an hour, spinning, when I stepped off the bike, I couldn't walk.  I tore the meniscus in my right knee.  Oh poo!

I had a minor surgery to clean out the messed up tissue in my knee. 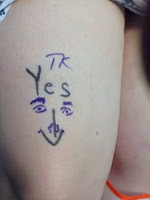 I wrote "yes" on my right knee and "no" on my left knee.  The doctor made faces on my writing!

I have been having terribly painful knees now for over a year.   I think I posted a picture on a recent blog post of getting steroid shots in my knees a month or so ago.   They really helped a lot.  For a while.

And now, I am in pain again.  I need to have knee replacement surgery.  In both knees.   I am very overweight.  My doctor explained that the risk of complications and infection is greater if your BMI is too high.  So, I am working on my weight with Weight Watchers.    I am hopeful.  I think that if I lose enough weight I will feel better anyway.  But the bone on bone arthritis in both knees will not go away.

I love walking, but I just can't right now.   I want to walk around our new neighborhood and meet our new neighbors.   I can't.   My cane is my friend.  At least there are nice looking ones.  I like my blue and white cane. 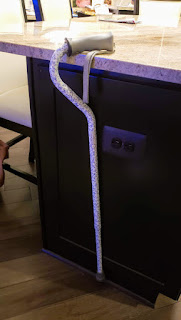 I look forward to one day in the not too distant future I will be walking all over the place again!

I have neglected to say how wonderful it is to have a husband like Nick.  I feel like he is doing everything.  He's been the main grocery shopper for years.   He has to stay fit.  I need him!