I've been back from the west coast for two weeks today.

It was so nice to be able to stay with Courtney in her new house.  She's my first baby.  An adult with her own newly purchased house.   The way the light hit her while we were on her front porch made a beautiful picture of my beautiful daughter.

Courtney and I went to visit Darcy and Jody at their new home in Hillsborough, Oregon.  Darcy still has his big school bus/ prison bus, and since it was parked in the driveway, it wasn't hard to figure out which house they live in!


The second (third?) part of the trip, after leaving Courtney's was to take the train from Portland to Seattle.   I love the train.  Not crowded, big seats, and scenery.

Morgan picked me up at the train station, and I stayed with him and Kim for a few days (and nights). While in Seattle we went to see the Chihuly glass exhibit.  I have heard about this before, but had never seen it.  My cousin's daughter, Gwyne and Gwyne's daughter met us for lunch and then to look at the exhibit.   The museum is right at the foot of the Space Needle, which is pretty cool too. 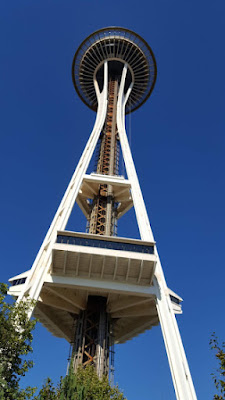 We also went to the Nordic Museum in Seattle.

Morgan and I visited friends Dorothy and Bob, who's oldest son went to kindergarten with Morgan in 1986.   We hadn't seen each other on at least 25 years.   Dorothy and I became friends because of our sons, but also because of La Leche League.

Morgan drove me to my friend, Alice's house in Mercer Island (a suburb of Seattle) where I stayed for the last days of my trip

Alice and I are friends through a La Leche League online group that was closed when the membership reached a little bit over 40. The email group started in 1975 or 76.

I also found a friend, Fran, (another from LLL) who I knew in Hong Kong when Chance was born, in 1990.   Fran was one of the wonderful women who helped me after Chance was born, and Austin, Chance and I were living in a hotel.    I was afraid that after 27 years we wouldn't recognize each other.  But we both recognized each other immediately.  I don't have any pictures of Fran.  I'll have to get her to share her pictures with me.

My flight back to Virginia was cancelled for mechanical reasons.  Re-booking was pretty complicated, so I took the next flight offered by United Airlines.  It left in the evening and got into Dulles at a little after 6 in the morning.

I got to see a beautiful sun rise out the plane window. 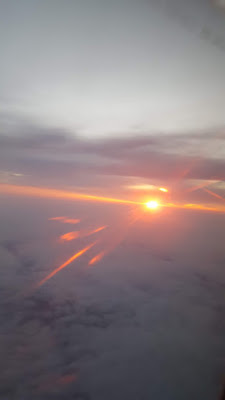 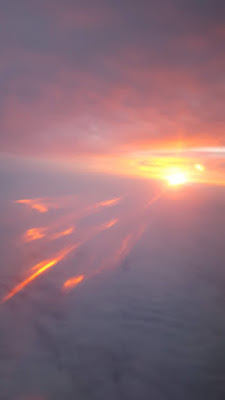