I am not sure why I haven't written anything for almost a month.  Yes, I am still here.  By here I mean alive.  Of course I am here because, wherever you go, there you are.

I had a few days of fairly serious jet lag.  Now I just have my usual tiredness.

Austin turned 32. He said he wanted an ice cream cake.  I looked at some in the store, but there's no way I could fit one of them in our freezer.  So I made one.  It turned out pretty good, and by making it myself I was able to make it gluten free which means I could eat some too.    The only flaw was the paper.  I used parchment paper to line the pan I molded the ice cream in.  I forgot to remove the paper when I assembled the cake which means we were all pulling paper out of our mouths as we ate! 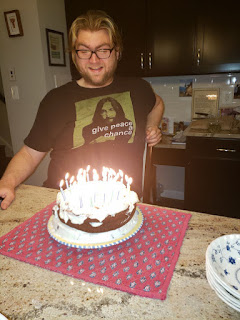 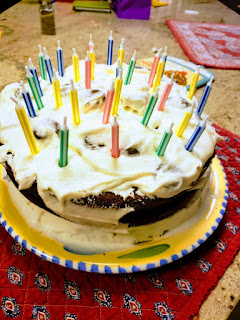 I've turned 65 since that last time I wrote here.   It's cool.   No big changes from the last day that I was 64 though somehow it seems like the number 65 reflects some kind of milestone.   For one thing, I am way past middle age.  Unless I expect to live to be 130 years old. Which I don't.   I guess I qualify for more discounts.  I am eligible for Medicare- I will sign up soon.

I kept up with my physical therapy while I was in Oregon which really was a good thing to do.  I am back at my PT here and even though it is hard, at least I am not starting from zero, which I would be if I had slacked off.

I am down one pant size.  I got myself a couple of new pairs of pants.  They are still a far cry from being "normal" as opposed to "W", the designation for big sizes- it means"women" not "wide" as some people might think.  And "women" means bigger that "misses", which I think if meant to mean average/ normal.

It seems like it has rained every day since I returned.  Of course it actually hasn't.  But it has rained a lot.  And my knees don't like the weather when it rains.  They hurt.

I heard from all five kids for my birthday.  That was probably the best gift I could ask for.

There are still some niggling things to do with the Reston house before Reston Association will sign off on the sale of said house.  We also have some things in the house that we need to move out.   I say "we".  I actually mean Nick and hopefully one of the kids.

Nick and I will be heading to Oregon again in July for Morgan and Kim's wedding.  In Courtney's back yard.     I'm looking forward to that.

Austin is heading back to Maine in June to study at the Maine Media school (I am sure I got the name wrong).    He learned so much during the couple of week course he took in April.  I am sure he will gain even more skills.  He is so very talented.

Time to let the dog out, bring the dog in, and go to bed.