First world problems, but they stress me nonetheless


Here's a recap. We put money down on our new house in February. Since the house was being used as a model home and office for the builders, we knew we wouldn't be able to move in until late June.

Meanwhile, we hired a realtor to help us "stage" our current house in Reston so we could put it on the market.

We have put about half of our furniture into storage with a storage and moving company.  Nick rented a storage locker to put the rest of our "stuff" in to.  We have tossed around three truck loads of stuff- old broken deck chairs, thousands of books and who knows what else. 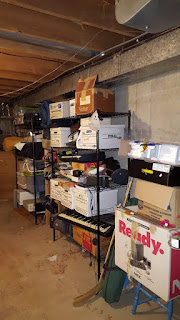 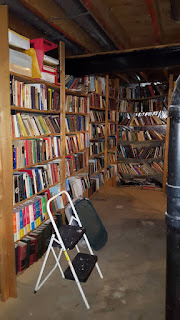 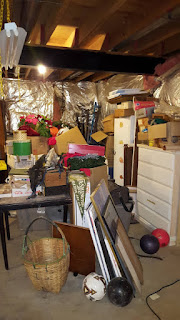 So much to go through.   What should we keep.  What should we donate?  What should we toss.   And of course, no help but each other.  I should say Nick actually since he has done most of the physical work.  There was a time when I would have helped, but I just cannot now. I am in almost constant pain from the arthritis in my knees.   We couldn't hire anyone to help because all of this is our stuff.  Personal decisions need to be made.

There are boxes with five children's worth of report cards, school work, drawings, stories.   School pictures.   What should I save, what should I discard.     There was also a completely full, large Rubbermaid bin full of my college notes.  Why on earth did I save that stuff.  (I guess I was so pleased with myself that I actually finished college that I wanted to save proof of how hard I worked).   I tossed all of that.

Nick carried everything upstairs and either took it to our storage locker or threw it out.  Well, most of it.  At one point it was so overwhelming that we had the Got Junk people haul the trash up from the basement and out of the garage as well. 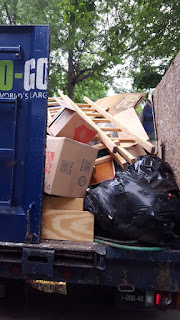 This next picture was taken after Nick has started to move things out of the storage locker, put them into a rental truck, and drive to the new house 30 minutes away. 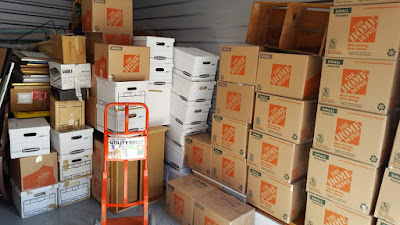 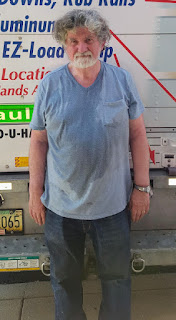 The weather was really hot with a heat index of over 100 degrees.  I was really worried about Nick.  In fact, at one point Nick called me to pick him up because he needed a break, a nap, shower, food and water.  Then he went back to work.

We might have been able to hire some day workers, but I'm not sure that would have worked.  What do you do with them when you need a break.   How do you tell them what to put where when it's all personal, family stuff.

So, Nick put everything into the garage in the new house.  By himself.  Everything still needs to be moved into the house.  The boxes are clearly marked "basement bedroom", "Master bedroom'  Kitchen"   At least now the new house is ours, so we can take our time.  Not that we enjoy having a garage full of stuff. 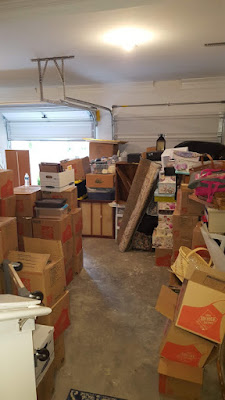 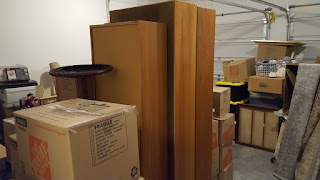 We weren't able to spend the night at the new house because the air conditioning in the main floor master (guest room) wasn't working.  When we bought the house, even though it was a model home, it didn't come with furniture.  I arranged to but some of the furniture.  But not much.  All of the other rooms in the house are empty and will be until we sell the old house- then we can move our stuff to the new house. 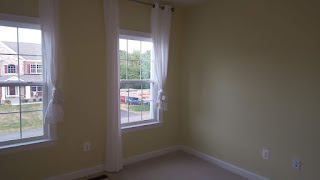 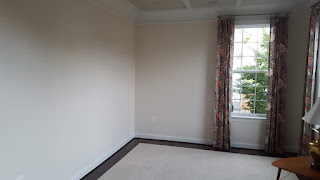 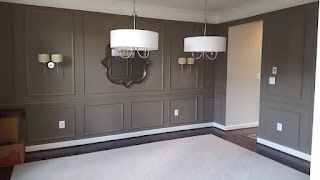 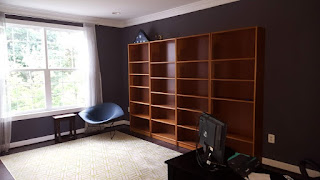 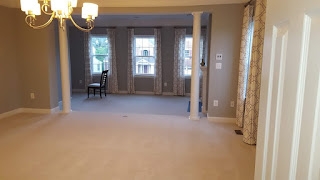 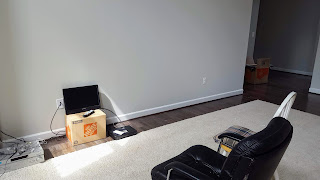 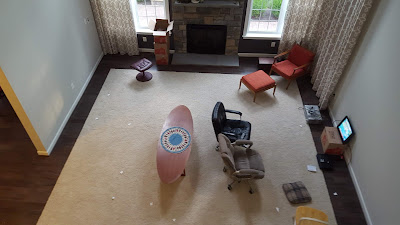